School Sponsorship Program   “3R” Reading, wRiting, aRithmetic, at primary level: designed to spark the love of learning that exists in all children, enabling them to read, write and do basic math Ten cutting-edge initiatives were developed this year and are driving a holistic transformation of the Shanthimalai schools. Dr. Ramya and Mr. Durai Ganesh […] 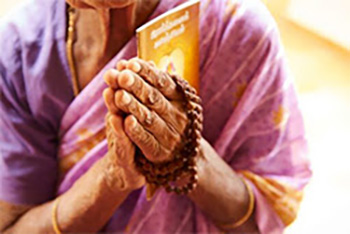 Connecting to Arunachala’s Ancient Spirituality By David Cosgrove I was raised and educated in a Catholic environment. Then, nearly fifty years ago when I was in my early twenties and searching in a library for books about world religions, I remember reading one that contained an excerpt from ‘Talks With Sri Ramana Maharshi’. In this, […]

By Gregory Jackmauh     Honoring Arunachala – Girivalam Seva Project (GVS) In 2014, our partner Shanthimalai Trust installed waste bins and began collecting rubbish along the Girivalam route that pilgrims walk each year around the sacred Mountain Arunachala. GVS was an immediate way to improve the environment and influence how local trash was managed. The […]

Emily Magal & Jim Greenwell, Interviewed by Robin Walden Emily Magal was an independent Project Manager for commercial real estate in Washington, D.C. Her husband, Jim Greenwell, is an architect. They became year-round residents of Peaks Island, Maine, in 2009. They sponsor Vinaya, who graduated from high school this year. Emily Magal and Jim Greenwell […]

By Deborah Cake Kalai (K. Kalaimagal) is the Production Manager at Premalaya Handicrafts, a Fair Trade handcrafts business in India that employs widows and other women in need. Deborah Cake is the Production Manager at Aruna Designs, a business run entirely by volunteers within Aruna Partnership. We partner with Premalaya Handicrafts in South India to design, import, and market […]

By Janet and Bill Kramer This past summer, Janet and Bill Kramer had the opportunity to visit with Anne Janeway, the first School Sponsorship Program Coordinator, at her lovely Vermont cabin in the woods. She generously shared stories of her past, exclaiming at one point, “Wow…I was lucky to have really interesting work.” When she […]

By Janet and Bill Kramer Janet Kramer, Aruna Partnership’s School Sponsorship Coordinator, is a retired clinical dietitian who worked in an urban pediatric clinic in Cleveland. Her husband Bill is a writer and retired substitute teacher. They reside in Cleveland Heights, Ohio.  Like many of our dedicated sponsors, Bill and I have supported the School […]

School Sponsorship This year has been a very difficult one for the families we serve. Your generous donations help make it possible for our partners in India to do everything they possibly can to alleviate the suffering caused by the pandemic.  In May, our partner Shanthimalai was chosen to be part of the District Covid […]